Significance Of A Cladagh Ring With No Gemstone 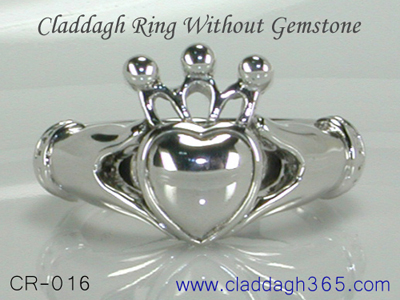 The introduction of cladagh rings with gemstones happened a few decades ago and today, most jewelers craft the centuries old jewel with a center gemstone. Gemstones are added to jewels with two important objects, colored gems undoubtedly add to the beauty and style of a jewel. And when you set an expensive gem like a sapphire or even a tanzanite gem in your gold or 925 silver cladagh ring, you are making a statement about your status too. The stories related to gems began centuries ago and some go as far back as a few thousand years. Those were the days when everything was explained and understood through simple reasoning - folklore and the supernatural. For example, it was believed that jade and more specifically the nephrite variety of jade, cured sickness related to the kidney. Carnelian came to be known as the 'speakers stone' and wearing it, was expected to waive away any stage fright that one had. Another reference to carnelian was the 'performer's' stone. In our time, you would often hear about birthstones and anniversary gems - wearing your birthstone is expected to bring all good things your way. Jewelers like Claddagh365 offer an unlimited choice of gems for gold and 925 silver cladagh rings.

So what does it mean when you wear a cladagh ring with no gem, does a plain cladagh ring have the same degree of  significance as one that is set with a gem. To answer this question we need to understand what exactly made this 4 centuries old ring so very famous and respected. The Cladagh Story tells us that, the meaning of the cladagh ring is narrated by the features of the ring. The first cladagh ring made about 4 centuries ago was made by an Irish fisherman named Robert Joyce. The young man was forced into slavery and separated from his beloved. The physically harsh conditions of slavery were something that brave Robert did not fear but, what he really could not bear is the thought of being separated from his beloved. To keep himself in a positive frame of mind, he decided to make a ring for his beloved hoping that, he would be a free man one day and gift it to her.

Years later when Robert was freed from slavery, he rushed back to his village carefully taking the ring with him. You can well imagine his joy when he saw that his beloved was still waiting for him. He gave her the ring and the young couple soon set up home in their small fishing village. The ring came to be known as the Cladagh ring, it was named after the village (also Cladagh). The ring had 3 important features each of these symbolized his thoughts and feelings for his beloved. The heart showed love, the crown depicted his loyalty to her and the hands signified togetherness through good times and bad. As you can see the story of the cladagh ring had no reference to a gem, the fact is that there was no gem in the original ring made by Robert Joyce. So after learning that love, friendship and loyalty through the main features give meaning and significance to the cladagh ring, it is clear that the absence of a gem will not reduce the importance or meaning of the ring in any way.

Even after knowing that, the first cladagh ring made a few centuries ago had no gem, it is interesting to know why buyers request for a cladagh ring with no gem. Some of you might be under the impression that, the absence of a gemstone would drastically drop the price of a gold or sterling silver cladagh ring. The point is that you have a wide range of gems to choose from when ordering a cladagh ring, not all gems are expensive and some are indeed very moderately priced. Also keep in mind that the metal for the ring replaces the position of the gem, the net effect on price for a plain cladagh ring might therefore not be much. One very important advantage that a plain ring with no gemstone delivers is better durability and easier handling. When you wear a cladagh gem stone ring, you need to ensure that the gem does not get damaged, cleaning and storing will also need to be done after carefully considering the physical properties of the specific gem. And there will surely be some buyers who are so impressed by the ring and the story behind it that, they wish to wear the jewel in a form that is as close to the first cladagh ring as possible.

From our experience in custom jewelry we can say that, men are the biggest fans of plain jewelry and this, is seen in the case of the cladagh ring too. Most of the requests for cladagh rings with no stones come from males. The reason is probably because, easy handling and cleaning sound important to men. Read the complete story of the CR-016 Plain Cladagh Ring, and consider this option the next time that you decide to buy this amazing jewel.