Men's Heart Rings,  Are They Suitable For Men

More men wear jewelry than they did a decade ago, and this change has been observed in almost every nation and across all age groups. But there are some jewels that you will very rarely see in men's jewelry collections. For example, pink gems do not seem to impress men and this is despite, a fairly large range of natural pink gems available in the jewelry markets. Another jewel concept that men do not care much about is heart shape jewelry and this includes heart rings. If you analyze market data it is quite likely to reveal that, men buy more heart rings and heart pendants as compared to ladies but, most of these are gift purchases made for some special person in their life. 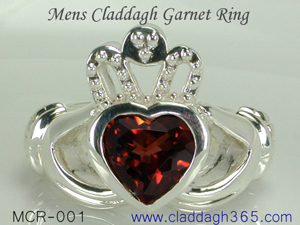 So it might not take much reasoning to conclude that heart rings are not quite suitable for men. Heart jewelry has always been associated with feminine style and fashion. And the fact is that, very few men's heart rings are crafted or sold each year and so, designers don't spend much effort in creating suitable designs too. But what if we told you that, there is one very specific type of heart ring that was first made around 4 centuries ago and this historic ring is suitable for ladies and men alike. We are talking about the Claddagh ring, a jewel that is today touted as one of the most meaningful jewels in history. The claddagh ring has increased in popularity each year as more people hear about the touching story behind the jewel, the meaning of the ring makes it relevant to everyone irrespective of religion, nationality, age or gender. The MCR-001 shows a Men's Garnet Claddagh Ring but, you could choose the gemstone of your choice when ordering. Men have always shown a preference for sterling silver and fortunately this jewel is crafted in both gold and silver. While Claddagh365 custom makes all types of jewelry in gold or 925 silver, they are respected as the best source for the claddagh ring. By backing up design and features with a thorough background research into the history and significance of the claddagh ring, they ensure that your ring retains all features of the first ring made centuries ago.

The important thing is that this heart ring is suitable for men because of the deeper meaning symbolized by it's features. So what is so special about this ring, what is the meaning of the claddagh ring. Here is the touching story of the claddagh ring and the meaning of it's main features. The story unfolds about four centuries ago in a small Irish fishing village named Claddagh. A humble fisherman by the name of Robert Joyce was one day captured on the high seas by pirates and as was common in those days, the young man was sold as a slave. His master a wealthy goldsmith forced him to learn the trade in the hope that, he would in the future turn out to be an able helping hand. As expected the conditions of slavery were physically straining and mentally oppressive. Robert could put up with all those hardships but, there was one thing that soon became unbearable. He could not come to terms with the fact that, he had to remain away from his beloved who lived in the same (Claddagh) village. To stay in a positive frame of mind, the young man kept telling himself that he would soon be a free man and be reunited with her.

As the days went by he realized that there was no logical reason to presume that, he would be freed from slavery any time soon. Under this mental strain he realized that, it would be his work that would soon suffer - he just had to engage in some thought or action that would keep him mentally grounded. At that point of time he decided to make a ring for his beloved, the thought of giving it to her when they met again seemed to put him in a better state of mind. Keep in mind that Robert Joyce was not an experienced jewelry designer or stylist, he just hoped to express his feelings for his beloved through the features of the ring. When he was indeed realized from slavery a few years later, he rushed back to his village and hectically looked for his beloved, you can well imagine his joy when he saw her patiently waiting for him. He gave her the ring and the couple spent the rest of their life together.

The ring was named claddagh after the village in which Robert Joyce and his beloved lived. In due course of time, the features of the ring came to be known to everyone. Interpreting the features of the ring was like reading his mind which was, sincerely expressing his feelings for her. The ring came to be known as the 'heart and hands' ring, some called it the 'hands holding the heart' ring. The heart represented his love for his beloved, the hands were extended in friendship and the crown showed his loyalty towards her. While it is true that, this ring had no gemstone in the center, the gem was later added to enhance the beauty and meaning of the jewel. You can request for a men's claddagh heart ring where the entire jewel is crafted in metal and therefore, does not include a gemstone.

Now that you know the true meaning of the claddagh ring you will agree that, this jewel is very much more than a heart ring, it is a jewel with tremendous meaning and feeling and relevant to everyone. When designed and crafted as a men's heart ring (as seen in the MCR-001 ring), the jewel is provided with larger dimensions and a larger gemstone too. You can wear this men's heart ring as a casual wear jewel or choose it for a men's wedding or engagement ring.

We do hope that you have enjoyed this report on men's heart rings. Few men would not be proud to wear the claddagh heart ring once they, understood the meaning and significance of the jewel. And to be honest, we have not yet come across any other heart ring, that men would accept so readily. Pass the link of this report to your friends and family and we can together, spread the word of this tremendously meaningful jewel. It does not matter where they finally choose to make their purchase from as long as, they read this touching story.